Now I have five baby ducks. Yesterday I got a call from a friend and neighbor, Melissa asking if I could take more. The story is kind of complicated, but the gist is that her friend’s mother who lives in Mobile had three orphaned ducklings whose mommy had been killed by a feral cat. So Melissa’s friend, Sharla (a Waters neighbor I had not met) told her mom that there was a person in the neighborhood who rescued ducks. The ducklings made their way from Mobile to my house last night about 6:30 via Sharla and her daughter.

Their three babies are at least five days behind my original two. Look how tiny she is in her hands. I tried to get a picture last evening when we put them all together in the coop but it was too dark to get a clear image. Within 10 seconds of putting the new babies in the coop all five were huddled together like proper siblings.

I have been keeping my original ducklings in a little cage in my dining room for the first week. I put a heat lamp on them since they can’t regulate their body temp right now.  I was astounded by Rowdy’s attentive care and concern for their welfare. 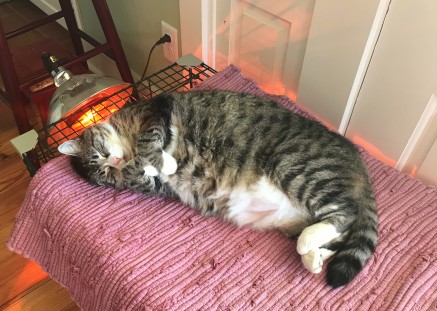 I’ll make sure nothing hurts these little duckies on my watch!

Later Sammy joined her in her vigil to protect the babies.

I’m hoping that cage can support the combined weight of these voluptuous lades.

Earlier in the day, the ducklings took their first swim in a pie pan.

Trust me, they had a blast in their little swimming pool but jumped out every time I tried to take their picture.

My sweet bunny Bella seems content without her brother, but how can you really know what  bunny feels? We pay her lots of attention and give her good food and treats. Here she is enjoying her morning salad.

Bella and the ducklings share the coop for now. She doesn’t seem bothered by them at all. They think she’s a big scary monster trying to kill them. Most of her coop time is spent upstairs and all of the duckling’s time is spent downstairs on the grass so fortunately they don’t get in each other’s way. Bella gets run-around time in the yard, but the babies are too little for that. At this point, they can slip between the pickets of my fence. When they’re bigger, I’ll let them take over the yard as well.

I’m doing the best I can. Ducks are waaaay harder to raise than chickens, I can tell you that! Anyone with advice is more than welcome to give it to me. I’ll try not to “quack” up!