I was feeling quite satisfied with our new bunny situation when we had an unexpected setback on the third day after the arrival of Bella and Bandit.  Our cats were lazing in the back yard while I let my two new little pets run around and enjoy the weather. My cat Tony got the idea that Bandit wanted to play so he joined in the frolicking.  My cats have grown up with bunnies and chickens all their lives and know that they are not allowed to harm them. But I should have known that it was a bad idea to let Tony near them so soon. How could Bandit know that he wasn’t on the menu.

Bandit did what all bunnies do when they are scared and want to signal danger. He THUMPED. A lot. At first I wasn’t concerned. I just picked Tony up and put him indoors. Then I saw Bandit limping. He had broken his foot. He’s an old guy and I guess his bones weren’t up to the vigorous thumps. Of course we took him to the vet and they did an x-ray. Yep. Broken. We weighed all our options and made a plan. The vet wrapped his foot, gave him an antibiotic and pain med and I took him home to recover in my laundry room. He may walk funny the rest of his life but hopefully his bones will stitch together on their own.

So sorry Bandit. Your other mommy had you for 8 years and you were fine. I have you for 72 hours and you have a broken foot. 😦

His vet is confident that he will mend and be back to normal in a few weeks. Meantime we give Bandit and his sister, love and lots of treats. He’s eating, drinking and getting around well. He just holds his foot off the ground when he moves. Poor baby. 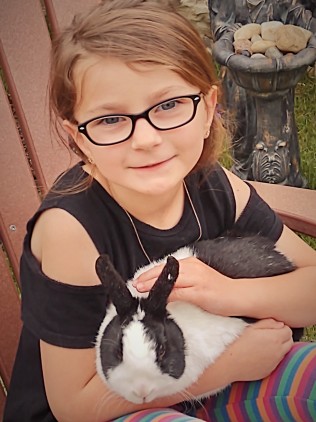 At least Miss Mattie got to visit you before you were hurt.

A baby duck was found alone in our neighborhood. No mommy or siblings in sight. A neighbor (thank you Raina) captured him and she and her sweet daughters brought him/her to me. So now I have two bunnies in my laundry room and a baby duck in my bedroom.

I had all the supplies from my baby chick days.

Mulder gave her a quick pat on the head before I put her in her new ducky house.

These guys will be at my house Saturday looking for a forever home!

More on these hooligans later

So I’ll say ta ta for now from the Burlingame KittyBunnyDuck Rescue Ranch and Spa.  It’s a madhouse, but it’s a fun house. 🙂

4 thoughts on “Not So Fast Foster Mom!”