Wade started to get lethargic on Friday. By Saturday he had stopped eating. When I put him in his pool he just bobbed and floated. He made no effort to splash and swim. I made an appointment for him with Dr. G at 10:00 am. He died at 9:15.

When we realized he was failing, we put him in a box with a towel and some water and tried to get him to drink. He lost his balance and couldn’t stand up so Jim kept putting his little beak in the bowl but he just wouldn’t drink. Finally we decided to leave him alone and stop trying to get him to drink or stand up. We watched with our hands on him while he took some labored breathes and then just went to sleep. Jim buried him in our pet cemetery next to Buster. I didn’t have a duck memorial, so I took one of my animals from my childhood collection for his marker. It’s very tiny and cute, like him.

Later, the mama duck and her three babies came up for some corn. I’m almost certain that this was Wade’s family but I wasn’t able to reunite them.

I lose animals a lot, and it never gets easy. It’s especially hard when they’re young and never really got a chance to live. But we tried our best and that’s all any of us can do. We will miss him a lot. He was three weeks old. 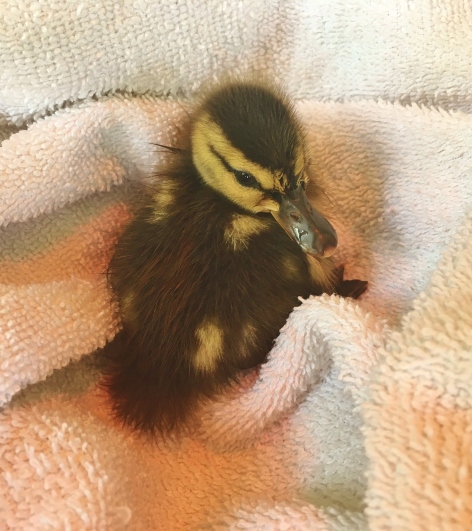 The day he came to live with us.

Thanks for the visits and kindness from my very special neighbors. Deb