I found a baby possum in the grass as I was driving out of my neighborhood last week.

I thought he was dead, but he was just “playing possum”. As soon as I picked him up he blinked and his little tail curled around my finger.

About the size of my hand.

I took him home and put him in a box with a towel. He seemed OK, but I wanted a vet to check him out. When I called Goodwin Animal Hospital they said that only certain vets have a license to care for wildlife and there were none in the area. I then called the shelter since I am aware that they have cared for baby possums before. Tonya (the intake director at MHS) said to give him a syringe of half milk & water and to keep him warm and in a dark place to lower stress.

I also found a little stuffed kitty for him to snuggle with.

He really loved it. 🙂

I gave him a bath in Dawn, which is what I do with my foster kittens for fleas. He was covered in them. I dried him off and he seemed to be content to sip milk and snuggle with his toy. All the kitties checked him out and were unimpressed. He ate well for three days and I was looking forward to having a pet possum for a while. He was so cute and he seemed to like for me to scratch him and hold him. Sadly he died on the third day and we put Opie in our ever-growing pet cemetery. Good grief! Baby possums are soooo cute! I wish I could have kept him longer. 😦 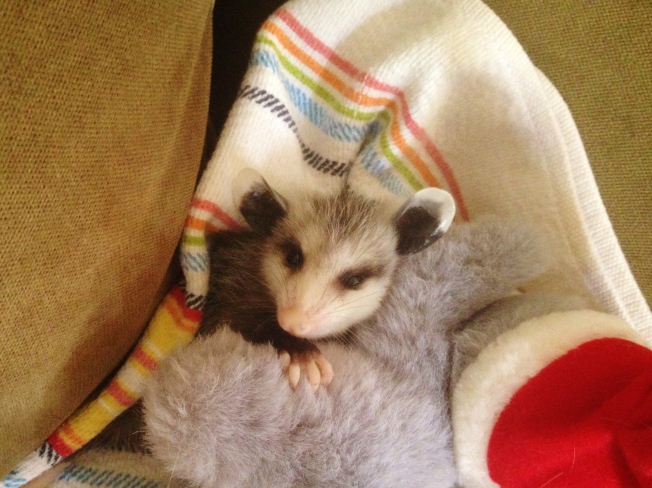