The chicks are beginning to explore the outside world now that they have proper feathers and there has been a break in the weather.  I put some doggy fencing in the yard last week for them to enjoy sunshine and scratch the ground for tasty tidbits.

Wait a second! Who said we could have more chickens?

Don’t worry Daisy, they’re only temporary guests. As soon as they are a little older, I’ll take them to their new home. Meantime, you need to be nice to them because they’re babies!

Now listen here you two! I’m the boss see! You remember that and we’ll get along just fine. BWAAAWK!

I have to keep them separated from Daisy until she decides to play nice. Meanwhile, neighborhood folks walking by have been enjoying the pastoral view in my back yard and some stop in to say howdy. 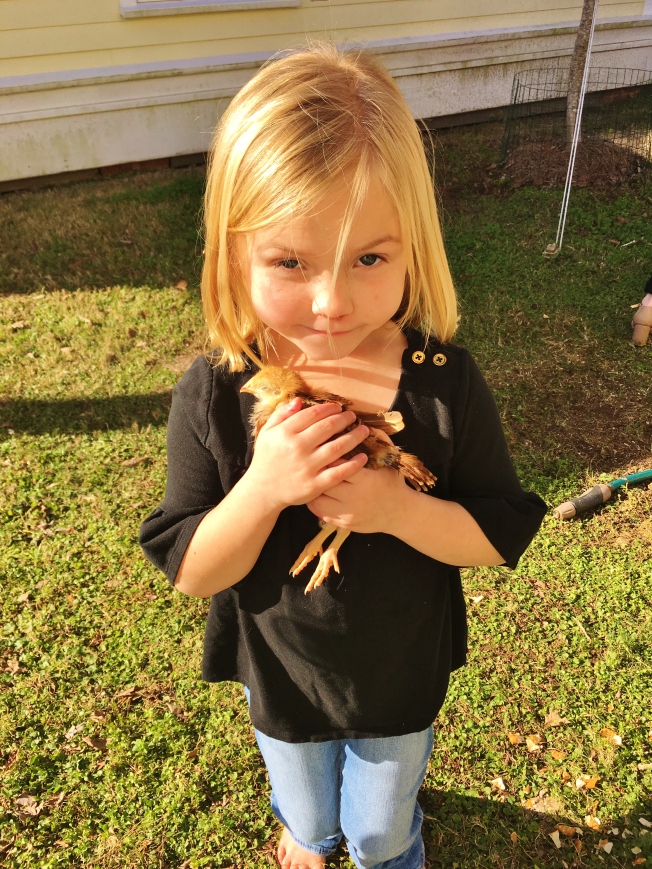 This is the cute little grand-daughter of my neighbors, David and Brenda. They have three lovely daughters and five lovely grand-daughters. (one on the way!) I’ve met the whole family now, but when I first met Brenda I was asking about her offspring and she was filling me in on all the kids, husbands and grandkids.  She mentioned that her son-in-law was Bobby Jon Drinkard and I stared at her blankly thinking OKaaaaaay….

Well, I may the only human in Alabama who didn’t know that one of our own starred in the wildly popular TV show Survivor. Brenda explained who he was and after I met him a few times, I decided he was a very handsome guy of course, but more than that, he’s a sweet person and a good father, husband and son-in-law.  He brings his own little girl over to pet Buster and chase chickens and kitties once in a while. All of Brenda & David’s family live in our neighborhood and they are all a wonderful part of our lives. 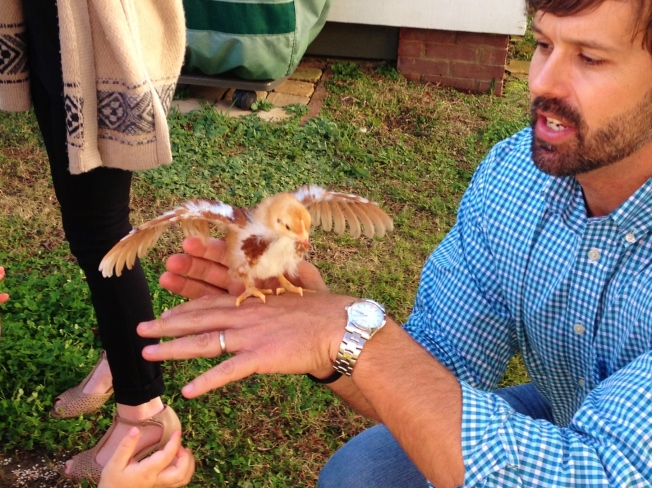 Gracie shows off for Mr. Bobby Jon! LOOK WHAT I CAN DO!

Of course I googled him and found out that he was on the episodes “Palau” & “Guatemala”. Bobby Jon Graduated from Troy University with a Bachelor of Science degree in Public Relations/Print Journalism. He’s appeared on news segments such as: Entertainment Tonight, Entertainment Weekly, Good Morning America, The E Channel, The TV Guide Channel, ESPN, VH-1, and the CBS Early Show, and was in the film WE ARE MARSHALL. I think it’s fun and cool to have our own neighborhood celebrity, and even though I was late to the party, I’m now a huge fan. The dude has some serious chicken-holding skills so he’s OK in my book.

Oh and I forgot to mention that in 2003 Cosmopolitan Magazine named him one of the 50 most eligible bachelors in the United States?

Good job Hayley. And by the way…I think your husband is the lucky one!