It’s been several days since I took my foster chicken to her new home.  I took so many pictures, I’m just now getting around to editing and posting them to the blog.  So many in fact that this post will be a two-parter.  The first part is all about the small chicken haven that is Goldie’s new home.  The lady who graciously took her in is Mary, my friend and fellow bunny rescuer who gave my former foster bunny Graycie a wonderful new home.

Graycie and her boyfriend Manny happily cohabitate in one of Mary’s many reclaimed and refurbished bunny hutches.

No, they are not cooped up in an outside hutch at all.  This is just their “bedroom”.  All of Mary’s bunnies have protective fences to keep them safe, but they all have free-range of their good sized yards.

Graycie and her industrious husband, dug this nifty burrow that goes deep underground. They hang out here too keep cool on hot days.

But more on the bunnies in another post.  Today’s issue is all about the CHICKENS!

Goldie was peaceful on the drive to her new home in Florida.

As soon as we arrived, I asked Mary to take a picture of me holding her because I realized I didn’t have one.

ALMOST as pretty as Daisy. I said “ALMOST”.

Mary escorted me through a maze of bunny warrens until we reached the chicken pen all the way in the back of her huge, shady yard. 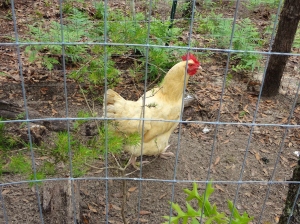 This will do just fine thank you!

I worried a bit about how the other chickens (three hens and a handsome rooster) would treat a newcomer, but Mary sent these pictures later in the evening after I got home. 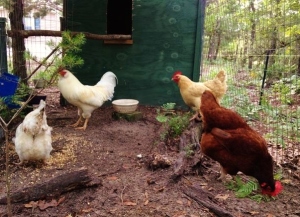 Goldie got a rude and rather intimate introduction from Mr. Rooster almost immediately upon her arrival!  I mean really!  Can’t a girl settle in a bit before being “cock-a-doodle-dood”? 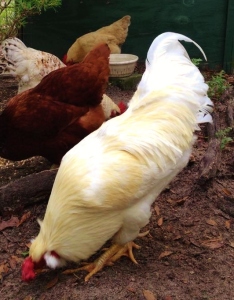 Mary doctored Goldie’s hind quarters (she had some “issues”) and quickly made friends with her.  She apparently can pick her up and cuddle her which makes me jealous.  She only ran from me, but maybe Mary and Goldie are birds of a feather.

After we got Goldie situated, Mary showed me a flock of chicks in a pen on her porch.  She’s raising some babies to join her adult flock.

Mary put a bouquet of heather in the coop and the crowd went wild!

Apparently these seeds are all the rage in chicken cuisine.

This was an eventful day and I haven’t even mentioned all the bunnies yet!  I drove home humbled at the love and compassion some people have for animals.  I talk the talk, but my friend Mary really walks the walk.  The amount of time and manual labor that goes in to her little slice of animal heaven is beyond imagining; not to mention the money she must spend on maintenance, vet bills and food!

I have a few more unpublished pictures of Miss Goldie and her short time at the Burlingame Petting Zoo, so please indulge me. 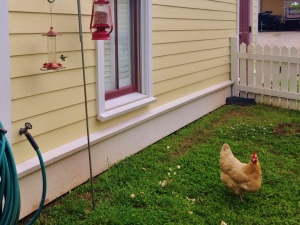 A hummingbird and a chicken walk into a bar… 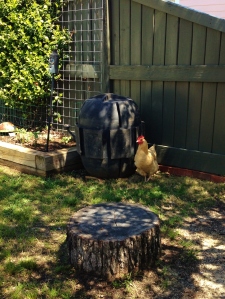 She sure did dress up my back yard.