Now get your mind out of the gutter!  I’m talking about baby chicks! 🙂 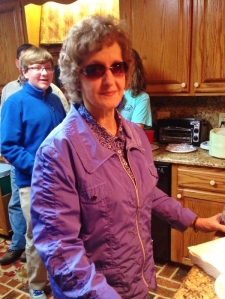 Mom lost an eye to disease many years ago, so she wears her “Cool Rays” indoors and out.  I think it gives her a mysterious hipness to which I can only aspire.  Over 40 family members attended the party given by my sister “Bob” (long story) and a great time was had by all.

As always, when I go home, I am witness to the new and weird adventures of my 81-year-old daddy.  I told him to try to look “legendary” and this is the result. 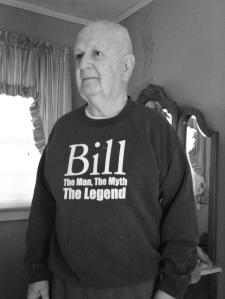 Guess who gave him this shirt? 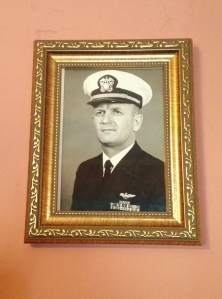 Dashing Naval Aviator who stole the Pegster’s heart and dragged her from Small-Town Mississippi to GUAM, and promptly began production of yours truly. 1962

So, here’s the baby chick part…

Jim and I were sitting in bed at Peg & Bill’s casa drinking coffee and discussing important matters,  (Did you remember to bring the camera?  No, I told YOU to pack it!) when all of a sudden, Daddy appeared before us with two peeping handfuls of cuteness.

I had to wash this pillow case later.

These are his miniature BB Red chicks that he hatched in a spare bedroom and were now living with their siblings in a homemade brooder he invented from cardboard and a heat lamp. 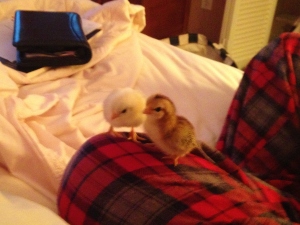 As usual they prefer Jim.

I herded them back to my pillow for some “mommy” time. 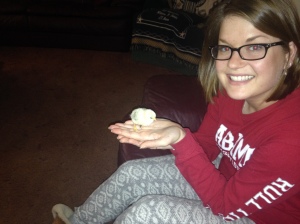 This is our little “chick”, holding a chick.

The whole family has tried to discourage Daddy from hatching any more babies, but he will not be persuaded.  He loves hatching the eggs in his incubator and watching them grow in the brooder until he can take them to the barn to join the ever-growing flock.  Although this may sound morbid, Daddy has discussed his wishes for the chickens when he passes to the great coop in the sky.  I’ve been given the name of a farmer who will come get Daddy’s birds and raise them in a lifestyle to which they have become accustomed.  I’m pretty sure he hasn’t planned as well for his human offspring, but this is none of our concern. (Or so I’m told)

I will tell you that it took all of my self-control not to bring these two little pecker-heads back with me.  They are miniature versions so they would take up very little room in my back yard, but I couldn’t be sure that one or both weren’t roosters so I couldn’t chance it.  Plus I haven’t forgotten the wrath of the grouchy neighbor who had an aversion to urban chickens.  Sigh.

I did not return home empty-handed, however!