I have a new “animal” in my house for a while.  I was going to make a post about her this morning but while I was downloading and editing pictures, I found some unpublished pics of Bobbi Sue, so forgive me for lingering on the subject of my last foster pet, I could not let these go without sharing.

Rowdy actually got to know Bobbi Sue a bit and taught her about the magic of relaxing in a sunbeam.

She eventually let this little one snuggle with her once or twice. There is NO softer place than a Rowdy tummy.

And here are two more pictures of Jim and Bobbi Sue sleeping on the couch.  I could fill an album with photos of Jim sleeping with foster kittens on the couch and it would be THE BEST PHOTO ALBUM EVAH!

It’s long been his habit to spend the foster’s last night having a sleepover on the couch and this was no exception. 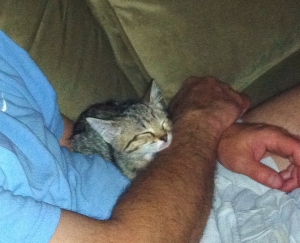 Will they have couches like this at the shelter??? 😦

I can’t promise these are the last photos I’ll share of Bobbi Sue, but for now I’d like to introduce you to my new foster critter.