We’ve had a renovation project going on in my kitchen for about six weeks.  It should have taken a long weekend, but we’ve had many house guests and Jim has been travelling a lot with work so he has not been readily available to do my bidding.  (My bidding is unceasing.)  Bear with me while I take you on a little home-building journey.

In 2007 we built our first (and only) house.  We’ve lived in military housing most of our married lives, and even though the houses are perfectly fine, (everyone’s house is ugly, so it really doesn’t matter) we were ready to make something special.  The kitchen was an especially important room since we both like to cook (and EAT!)  We went along with the trend of placing the microwave above the stove top to save room since our counter space was limited.

I made the veggie tiles at one of those Paint Yer Own Pottery places.  I know you will be shocked to learn that I have no professional training in this area.  I just drew some free-style vegetables from a foggy memory of what they should look like.

Jim said they look like a very talented ten-year-old did them.

In fact, when I picked them up after they had been fired, the clerk (who had not been present when I painted them) told me what a great job my child had done!  (I did not correct her mistake)

Anyhoo…The tiles were charming for almost seven years and I was sorta proud of my feeble efforts; but both of us were aware that it did not look very professional, and even the way they were installed had bugged me from the beginning.  Also, the giant microwave was a problem as well, since it limited the space between pots and pans, and the underside of the micro.  So we decided just to take out the huge oven and get a simple hood to match our appliances. Then we would have the opportunity to re-do the backsplash with something perhaps a bit more grown-up looking. 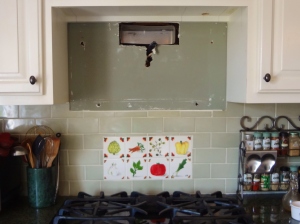 Replaced with cute retro microwave about 1/3 the size. 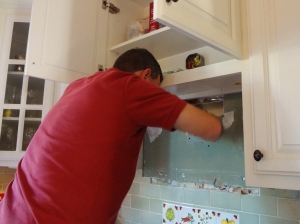 Had to hire some muscle for this part. Thanks Dennis!

Now, I’ll be honest here.  I was perfectly happy with the fact that my dear hubby would install a new hood over the stove.  He’s handy in many ways and even if he’s never done something before, he can usually watch a video online or look in his handy home repair manual and git er done.  He did a great job and the hood works like it’s supposed to.

Bam! (Emeril said I could)

However–when he suggested that he could also demo the old backsplash and install a new one, I was skeptical.  I gently suggested that perhaps a professional would be best for this next phase and I began to get some estimates and recommendations from my  neighbors.  After learning that estimates for this job START at $300, I reconsidered Jim’s offer to create the new and improved Burlingame Backsplash of the Century!  ($300 buys a LOT of Beanie Babies!)

(Stay tuned to find out how it turns out!)