Where did I leave off?  Oh yes, I came home from my visit to Mississippi…I ascended the stairs…opened the door to the “kid’s” room…and my jaw dropped to the floor.  At that moment, I stood as witness to the MOST EPIC BEANIE BABY PROJECT KNOWN TO MANKIND!

He rules his kingdom with an iron claw. (Sloths have claws right?)  He orchestrates the building and maintenance of his vast empire from atop Raggedy Ann’s noggin.  He is master of all he surveys and his commands are obeyed by a population of over 250 loyal subjects.

These are conscripted laborers in the Public Works Department.

It is their duty to build roads, bridges and railways for Jorges’ various enterprises.  These workers are paid well, but their days are long and tedious.

Flutter, do you think we should unionize?

Other subjects in Beanieopolis are more fortunate.  As an avid fan of Confederate history, Jorge employs actors under his rule to reenact classic battles between the Blue and the Gray.

Do you spot the spy among the troops

I had to think about that one for a while.

Jorges’ devotion to classic film is legendary.  He employs even more Beanie thespians to perform scenes from some of the greatest movies ever to grace the silver screen.

Here are a few of his favorites…

THE OPENING SCENE FROM THE GODFATHER

Someday, and that day may never come, I’ll call upon you to do a service for me. But until that day – accept this justice as a gift on my daughter’s wedding day. 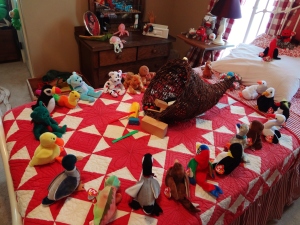 May the odds be ever in your favor.

And what film library would be complete without an iconic scene from TITANIC?

Of course not all citizens of Beanieopolis are productive members of society.  These poor creatures have been incarcerated.  Jorge caught them fishing without their amenity passes and put them in jail.

A pox upon you Deputy Talley!

Stretch is ’bout to shank somebody!

But life on Beanieopolis isn’t all work and rehearsals.  A wedding was recently held on the island and it was a thing of beauty.

The wedding was well attended by all Beanies not otherwise employed in Jorges’ bidding.

Reverend Grace Bunny officiated. Not a dry eye in the crowd!

Catering was provided by the trusty volunteers from Jorges’ vast pool of culinary specialists.

Are we getting overtime for this?

Did you get the chicken or the fish?

(I guess I should have checked Miss Sock Monkey’s pose before I took this picture!  Note Hannah’s beloved old doll “Chair” next to her.  That kid was a wiz at naming her toys.)

Of course, as in any kingdom, there are subjects who manage to stay under the radar and avoid the scrutiny of Jorges’ constant gaze.

Chickie retreats to the stacks in the Beanieopolis Public Library.

And there are always a few poor souls who just never fit in and retreat to the farthest corners of the kingdom to take comfort in anonymity.

This is poor Swoop the “existential angst” pterodactyl.

I couldn’t be more invisible if I was EXTINCT!

Well, that’s all.  I know you will join me in marveling at the strange and wonderful brain of Tama.  She’s a great friend and one of the biggest weirdos I know.  It took me several hours to put my beanies back in their proper places and pack away all the toys and decorations she dragged out of my closets. Never underestimate people who appear normal from the outside.

You just never know what lurks in the recesses of their dark and goofy minds.

4 thoughts on “What Tama Hath Wrought”