Last week, Jim was awakened from his slumber by a fluttering/bonking sound.  At 3:00 am he got out of bed and entered the bat cave (our bathroom) to investigate.  Sammy was batting wildly at some flying thing that was crashing into the walls and swirling violently back into the air.  He soon ascertained that the creature was a bat.  After a long while he was able to capture the little guy in a towel and set him free in the back yard.  I slept through the event and was blissfully unaware of my husband’s valiant duel with the chiroptera. (I googled it)  Brave Jimmy got back in bed and slept for another hour when the same sound woke him again.  Mr. Bat’s wife was stuck in the tub and was unable to get enough traction to fly out.  How do I know it was a female?  I don’t, but of course the story is much better this way.  It was an obviously smaller critter and less athletically inclined so let’s assume she was his lady friend.  She was much easier to capture, and again, he set her free into the Alabama night to pursue her batty pursuits.  This made for a great story the next morning and I was quite impressed with Jim’s bat wrangling skills.

The saga continued the next night when Sammy was again going crazy over some flying thing, but this time it was in the living room.  Mr. Mulder headed for the hills.  He wanted no part in this scary flying monster and he hid in an undisclosed location for a long while.

Rowdy was completely uninterested in the commotion and continued to watch her favorite program on the telly. 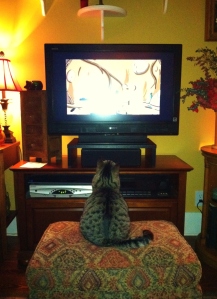 I tot I taw a puddy tat!

Jim was in the kitchen preparing my dinner, (I like it when a man knows his place) so he dropped his spatula and grabbed a dish towel.  He was eventually able to shoo Dracula out the back door and we shut every orifice we could think of in our house.  This only trapped bat # 2 indoors and this time I got in on the action.  I managed to capture this little black bloodsucker and held her long enough for Jim to snap a picture.

The photo is lousy, but my prisoner was in no mood for a photo shoot so this is the best we could get.  These things are kinda scary lookin’ in the face but cute at the same time.  We were able to figure out that they were flying into our shower window.  We have a small crank window in there that we usually keep cracked to let out moisture.  (This would also explain the exotic tree frog clinging to my shower wall last spring.)

I have to admit that the next night I was a little disappointed that our visitors did not return.  There’s hardly ever a dull moment here for some reason, but I like it that way.  Sammy agrees.