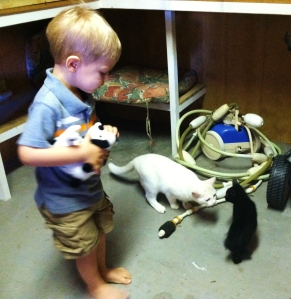 Don’t be afraid, these doggies are stuffed.

It didn’t take long for the babies to warm up to their big brother Snow. 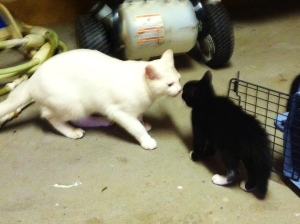 Snow did not like that “Mulder” smell on his little brother, so he gave Knightly a good bath. 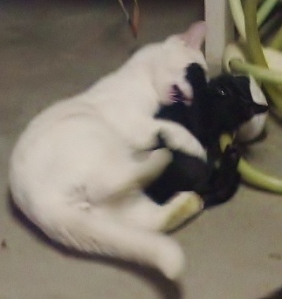 While I was there Debbie really wanted to re-introduce them to their mother, but Bella was skittish and wouldn’t come around for a reunion. 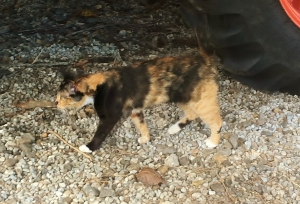 With my little foster kittens safely ensconced in their little kitty house, I asked if I could go visit Miss Daisy.  Debbie and I walked out to the chicken palace and called but she didn’t come running like she usually does.  I instantly got a sick feeling in my stomach  because that girl was always FIRST in line for my call and my grapes.  Debbie suggested that she might be laying an egg, so we peeked in the nest box and there she was.  Whew! 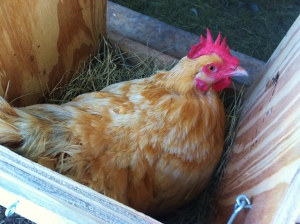 She gently took three treats from my fingers and I gave her a few pats before we closed the lid.

By business concluded I returned home to find a sweet photo in my email.  Debbie took a picture of Bella reuniting with her kittens.  As soon as she saw them Debbie said she wrapped them up in her paws and started licking them vigorously! 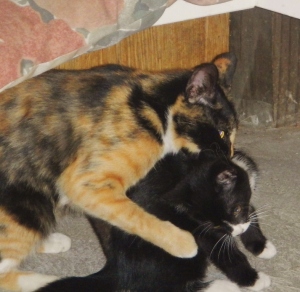 I’ll get that “Mulder” smell off if it’s the last thing I do!

We weren’t sure she’d remember them, but I guess a mother’s love is pretty strong.  These guys are going to have a great kitty life on the farm with their mom and big bro.  Thanks for letting me borrow them Debbie. 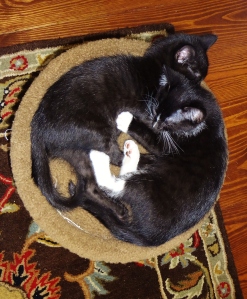 And then there were two.  🙂