So little Andy was still not giving in to the charming Mr. Mulder.  He much preferred another fluffy animal in our home.

I’ll stick with this two-legged animal if you don’t mind.

But on recent night on our porch, Amy tried to persuade him to join her in a snuggle fest with Mr. M.

And he smells really good too. *sigh*

I don’t see what all the fuss is about!

For the non-cat people who read my blog I want to emphasize just how unusual it is for a fully grown male cat to behave maternally toward two tiny alien invaders.  Mr. Mulder is one in a million and we are so fortunate to have him help us train new kitty recruits.  None of this surprises us.  We knew he was special from day one. 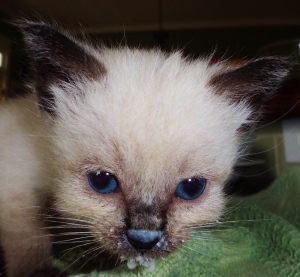 6 thoughts on “Resistance Is Futile”