When Debbie brought Augie & Uggy by last week, she brought her camera to document the visit.  She took some very cute photos of the little puff balls. 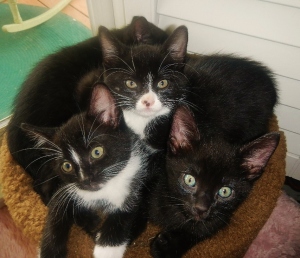 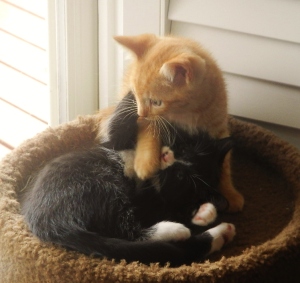 I think she may have inadvertently had some kind of filter or film on her lens because it produced a wispy effect that actually turned out nicely.

Kittens in the mist

Later we borrowed by neighbor Terri’s golf cart and we rode around the neighborhood admiring the scenery.

One of my neighbors. His name is Georgie. Notice his tongue sticking out. 🙂

Gosh Debbie, you’re such a good photographer, you should have your own blog!  Oh wait, you do! 🙂

Debbie had kept two of her litter to have as pets on her farm.  She soon learned that if you want tame, friendly kittens you really need to raise them in close quarters with humans.  Aubie & Uggy were perfectly happy in their outdoor shed with their food and water, but they were quickly becoming wild kitties who had no need for human interaction and this is not what Debbie intended.  She hoped for some pets that her grandkids could hold, and pet and play with, but these two were on the run and hard to catch.  So…she enlisted the services of a good friend (me) to keep them for a while and turn them into love muffins.  What’s two more, right???  She brought them over a few days after she had brought the first five and we put them in with the others.

Uggy ran under the bookcase almost immediately but Aubie climbed up on the window spot and received some mandatory love from Muzzy.

I’m gonna welcome you with some kitty love whether you want it or not.

No really, get in here for some snugglin’. 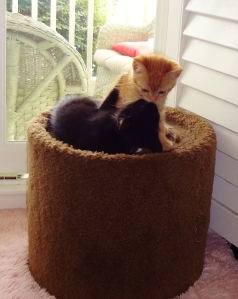 I think you need some kisses too!

Soon, little Aubie was feeling right at home and even Uggy came out of her hidey hole for a group photo.

Now THIS is what I call a “Rainbow Coalition”! 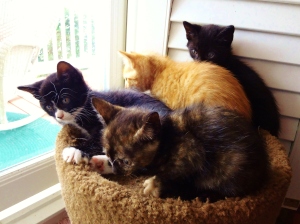 The verdict is still out for Uggy!

The word is out and we have begun receiving regular visitors to the kitten ranch.  Bring it!

KITTENS STUCK IN A TREE!

We wouldn’t be stuck, but this lady put us up here!

Is she always this mean?

OK, please don’t call the fire department OR the SPCA.  No kittens were harmed in the making of the post. 🙂

The kids took a tour of their kitty kwarters and discovered the food, water and facilities.

Soon a couple of them found the great spot by the window.

The rest of the gang caught wind of this prime section of real estate and joined the fun.

They won’t be able to do this much longer!

Soon the inevitable happened and neighbors began the pilgrimage to The Burlingame Kitten Farm.

Oh Jill, you KNOW you want one!

Come on down!  These guys are half price and worth every penny! (OK they’re free to a good home) 🙂

Mulder has been in a funk since Amy & Andy went to the shelter for adoption. 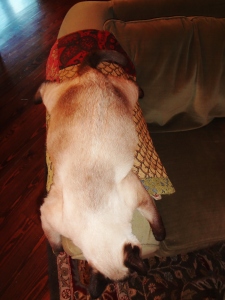 He was in luck because my pal Debbie had a litter born to her barn cat Bella, and was hoping I could take them after they were weaned to go to Mulder’s training camp for indigent kitties.  (Bella is getting her “surgery” this week!)

Debbie, you’ll remember, is my friend who gave Rosie, Daisy and Violet a home when they had to vacate our neighborhood.  Daisy now lives with about twenty of Debbie’s chickens on her beautiful farm.  You’ll also remember the tragic event last summer when wild dogs killed half her flock including my Violet and Rosie.  Debbie said since that awful day, Daisy is a loner who spends time at the edge of the chicken yard doing her own thing, although she gets along fine with all the other chickens.  I was happy to see her running toward me as I approached the gate.

I hope she brought grapes!

Of course I did, silly girl!  Now show me you still got it!

Aw, come on, you can do better than that!

THAT’S what I’m talkin’ about girlfriend! 🙂

Debbie said she roosts next to her protector, Claude, and she still lays the occasional egg.  I really miss that chicken and I wasn’t about to leave without a hug from my sweet little bird.

She’s the only chicken Debbie (or anyone) can catch from her little flock.  It was great to see her doing well and I’m hatching a plan to get her back to the Burlingame ranch to live out her golden years in luxury and ease.  More on that later.  Hush, hush!

So It was time for the kitten transfer and Debbie was getting a little misty.  She really loves animals and wanted to keep them all but knew that wasn’t feasible.  Out of the seven babies, she did keep two and I became the adopted mom of the rest.

We live in a chicken coop! It’s super fun!

We put them in my kitty carrier and off we drove to live in a house and learn about litter boxes, furniture, cat toys, vacuum cleaners & MR. MULDER!

I heard not a peep out of anyone on the 45 minute ride home and even now I have not heard a single meow.  Eventually one little guy/gal came out to explore but he/she went right back in. 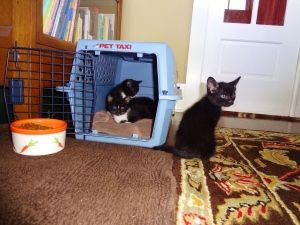 This is the strangest chicken coop I’ve ever seen.

I haven’t come up with names yet because Jim has to determine all the sexes (Hey, everyone needs a talent).  I have named one kid with the white around his/her muzzle.

The whole time I was setting up the Kitty Kamp in my office, Miss Rowdy watched from a chair.  She’s seen countless litters come and go and she was unimpressed as always with their cute fuzziness. 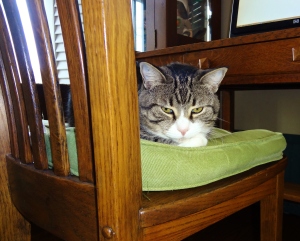 Big woop. I’m cuter than that.

So, come one, come all to the B’game kitten farm.  (Jill you know it’s time!) I expect to have these babies for about two weeks.  I can find homes for any of them on my own since they are not shelter cats, but whoever takes one, must promise to get shots and surgeries for them.

Fear not, the Burlingame Kitten Ranch and Day Spa won’t be empty for long.  New recruits coming next week!

So little Andy was still not giving in to the charming Mr. Mulder.  He much preferred another fluffy animal in our home.

I’ll stick with this two-legged animal if you don’t mind.

But on recent night on our porch, Amy tried to persuade him to join her in a snuggle fest with Mr. M.

And he smells really good too. *sigh*

I don’t see what all the fuss is about!

For the non-cat people who read my blog I want to emphasize just how unusual it is for a fully grown male cat to behave maternally toward two tiny alien invaders.  Mr. Mulder is one in a million and we are so fortunate to have him help us train new kitty recruits.  None of this surprises us.  We knew he was special from day one.

Amy and Andy enjoyed their new home for the first few days, but they mostly stuck together and avoided the other wildlife in the house.

Gradually they began to explore the house and meet many exotic creatures!

I’m not sure who this guy is, but he said I could share his water.

Gradually the inevitable happened and little Amy succumbed to the powerful charms of Mr. Mulder. 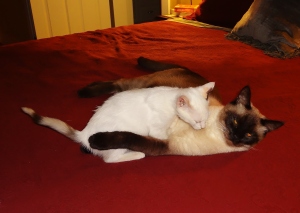 Let me teach you about hugs. 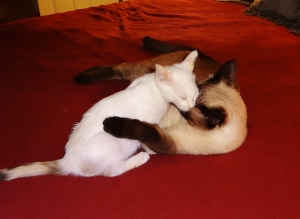 Now I’ll teach you about kisses. GET A ROOM GUYS!

So far Andy is not impressed with the dashing Mr. Mulder.  I have a feeling this will change very soon.  No kitty can resist the charms of the SWEETEST, MOST HANDSOME BOY EVAH! 🙂

These two are my new house guests for about three weeks. 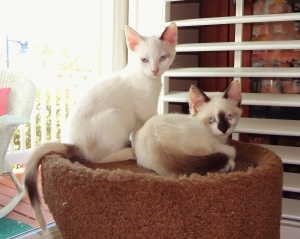 They’re still a little shy, but they’re learning all about how to be proper housecats at their temporary home.  Mr. Mulder is a bit wary of them because they look a lot like him and he fears they might be his replacements.  Not to worry my big boy.  You are irreplaceable.  🙂