While I greatly enjoyed my chicken adventure this week, I realized that keeping a lone bird in my backyard isn’t really fair to Rhoda.  Chickens are social animals, and although Jim and I have been called “bird-brained” many times, we were just not adequate company for our feathered friend.  Fortunately, I have several chicken pals who would have been willing to take this pretty lady into their hearts and homes, so I was able to place her in a perfect environment for her safety and happiness. 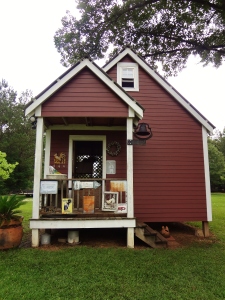 My friend GT is a master builder.  He built this souped-up chicken coop years ago for his lucky flock and this will be lucky Rhoda’s new home.  (He built Casa de Burlingame too!) 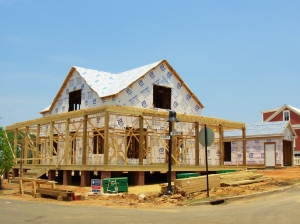 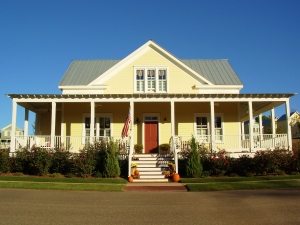 GT and his friend Lee have kept chickens for years and they have a beautiful country place. 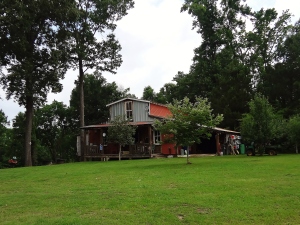 One thing you must consider with chicken relocation is that when you take a lone chicken to a new farm there is always a possibility that the resident chickens will not be welcoming to a newcomer.  Often a group of chickens will torture (and sometimes kill) a single new chicken in their midst.  The great thing about bringing her to GT’s is that he currently has no adult chickens on his farm.  As I was driving in, I saw a mamma turkey and several babies crossing the long drive.  There are also a few young chickens running around who look like they may be 8-10 weeks old. 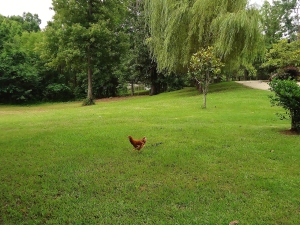 One of Rhoda’s young playmates

These “adolescent” chickens are no threat to our mature Miss Rhoda, so she can roam around these beautiful grounds struttin’ her stuff as the Alpha Queen of the Castle.  And inside the “castle” where I dropped her off was a really cool surprise! 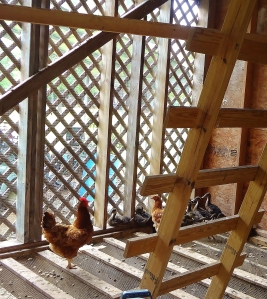 I put her inside the coop where she would stay for a few hours to acclimate herself to her new surroundings. She stared at the baby ducks for a bit and then joined in like she was Donald or Daffy.  They were a bit leery of this big red lady, but then everyone started acting like they were old friends.  Later in the day, Lee went out to feed her and Rhoda ate from her hand and let her new “mom” pet her.  As the young chickens grow up, they’ll look at Miss Rhoda as one of their own and all will be well.

I saw this sign on GT’s coop and had to laugh.  My dad has the same sign on the wall of his “honor system” egg business where folks drive up and take eggs from an outdoor fridge and leave their money in a cardboard shoebox.  (Daddy has about 60-70 Rhode Island Reds) I’m sure Barney’s intimidating presence is a good deterrent against larceny. 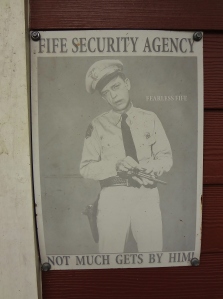 All in all I’m feelin’ pretty good about my animal juggling act.  During the last two weeks I’ve found a good home for my sweet, wild little bunny Dave, three foster kittens, two rescued goldfish and a runaway chicken.  It’s getting kinda quiet around here.  Jim, what do you think of pygmy goats?  I hear they like to live in pairs. 🙂

5 thoughts on “Rhoda Hits the Rhode”