Shortly after I brought PB & Jay home from the shelter, I got a call asking if I could try to socialize a very skittish kitten who seemed to be afraid of humans and was almost feral in his behavior.  I said I would try, so I went to get this “fraidy cat” with high hopes. 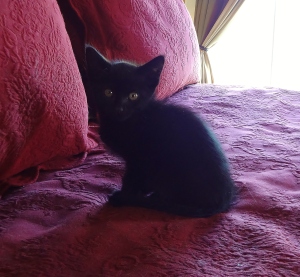 The shelter had given him a name that didn’t fit, and I was going to call him “Ferral” but Tama took one look at him gave him the character’s name from one of my favorite movies.

If you have not seen Steve Martin in THE JERK you must rectify this situation immediately.

Navin’s story is quite sad.  Apparently, a kind person trapped a mother and all of her kittens except one, and took them to the shelter. (The mom to be fixed and the babies to be farmed out until they made weight.)  Poor little Navin could not be caught, so he lived for many days on his own until he could be trapped and taken to the MHS.  No telling what kind of horrors he endured as a tiny defenseless little guy, but he was lucky to finally be caught and brought to a safe place.

This little black quivering mass of kitten took a long time to get comfortable at Casa de Burlingame.  I had to hold him and give him mandatory love many times during the day.  The first creature in our house he warmed up to was not, however, a human. 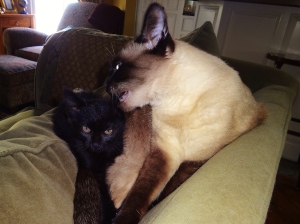 Mr. M set about making this new kid smell like a Burlingame.

On his third day, I squeezed a tiny bit of purring out of him and soon he was enjoying the perks of being a member of our family.  PB & Jay allowed him into their little circle and eventually Navin went from feral to tame.  🙂 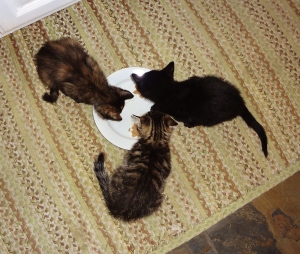 Thanks for sharing guys.

All three babies weigh close to their fightin’ weight so they’ll be vacating their vacation home soon to get their “snip, snip” and audition for their forever homes.  Maybe a neighbor would like a sweet, well-trained pet to add to the family??? 🙂  I can personally vouch for their Kitten Kwality!

One thought on “Meet Navin Johnson”