I’ll just get the hard part over first and then explain…Dave has a new home.  Here’s the deal.  Dave & Buster got along famously after he was fixed.

The raging bunny hormones had reduced to a point where these two male bunnies coexisted in harmony.  All was well until Dave hit the six-month mark, (full maturity for buns) when he began to get the idea that he wanted to be the alpha male.  According to all I’ve read about bunny pairings, this phenomenon happens about 10% of the time with two male rabbits.  Even though both are neutered, when they reach full maturity, one may decide that he wants to be the boss.  The only problem with this is, the only way to become the boss is to intimidate, the other bunny into submission.  If the other guy refuses to take a back seat (Buster), the fights begin.

In a nutshell, we’ve been keeping them apart unless directly supervised for about a month.  They will get along fine 90% of the time, but that other 10% could be deadly.  Bunnies have been known to seriously injure each other and in some instances even kill their friend in a fit of hormonal overload.  They can’t help it and they don’t mean to, but it happens.  Since Buster is the old man of the group, his safety was my chief concern.  Dave is a young strong kid who could really hurt his older pal.  So…about 3 weeks ago, I launched a serious search to find Dave a GREAT home.  With the help of the Humane Shelter, and a network of compassionate animal advocates I found the little guy a home even better than the B’games (if you can imagine such at thing!)  I’ll describe this wonderful young couple and their beautiful animal sanctuary in another post, but for the time being, I’d like to post some unpublished photos of my sweet bunny here.  Judge me if you will, but I’m at peace with my decision.  Dave has a long and happy life ahead of him and Buster is content to be the Alpha Bun in our home once again. 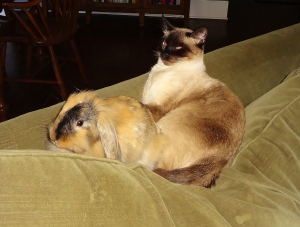