Mulder and Dave made friends almost from day one.

Mulder set about teaching him all he’d need to know to live on the Burlingame farm. 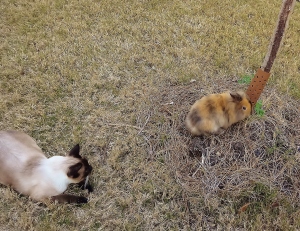 All was well and happy for a little while…

Mulder wouldn’t let me take out the “red-eye” cuz he thought it looked super cool! 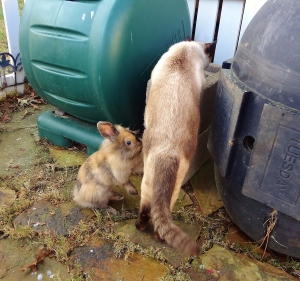 Dave’s hormones kicked in and he saw his big buddy as a “love interest”.

I’m not puttin’ up with much more of this you little fuzz ball!

Actually a maturing young bunny sees virtually everything as a “love interest” so things can get a bit hectic until you take the little guy to the vet for the “surgery that shall not be named!”  Mulder resorted to getting out of harm’s way whenever Dave was running loose in the house.

In addition to trying to love up on anything that wasn’t running for the hills (poor Rowdy included) Dave started being aggressive toward Buster man.  An unaltered bunny will challenge any other bunny in the territory, so Dave was positioning himself to be the alpha bun!  I’ve had to keep them separated and Dave isolated until last Monday when I was able to take him for his appointment with destiny.  The little guy made it through with no trouble and we brought him home that evening, a little sore, confused and loaded with pain medication.  It can take up to a week for the hormones to die down so we’ll need to introduce the two buns carefully and slowly just like we did when we first brought Dave home.  I’m already seeing signs that Buster is accepting Dave, and Dave has decided that Buster makes a fine Alpha Male.  This is all quite normal in the world of bunny husbandry and something most folks should acquaint themselves with if they should decide to get a pet rabbit.  A neutered male or female is much happier and healthier and is apt to live a longer life.  Plus, this surgery is most helpful in calming down a rabbit who is prone to “missing” his litter box and marking territory.  I predict harmony and happiness in our herd very soon.  For Mulder, it could not come soon enough!

Is the coast clear?

4 thoughts on “A Furry Bromance”