No, she’s not a nun, but she does the Lord’s work!  Martha is a good friend, neighbor, and fellow cat lover.

Due to Martha’s efforts and the efforts of several other compassionate neighbors, our neighborhood’s feral cat situation is SO much better now than a few years ago.  I asked her to write a short sentence about each of her cats for today’s post.  Below is the short version of how she came to keep 4 rescue cats indoors and one outside. 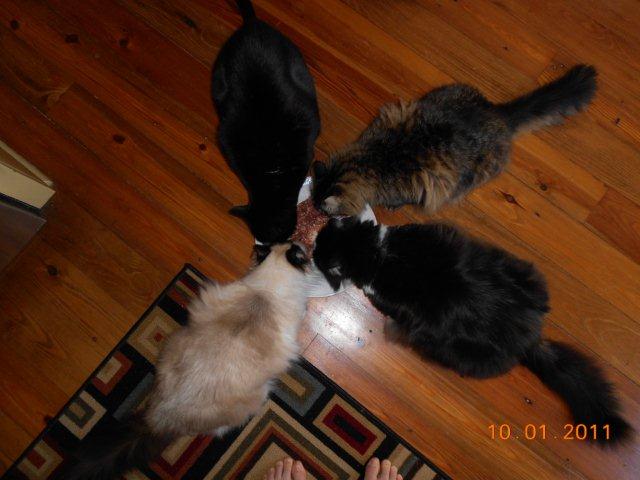 CASPER is 12, (all black) and was adopted from our old vet – he and his brothers and sisters had been abandoned on his door step.

TESS is 9.  She is a Rag Doll, but we got her from a rescue breeder in Georgia.

BOO (huge, 20+ pounds) was rescued from behind the Market (our neighborhood restaurant, Martha used to manage).   I fed him some bacon and he thought he had gone to heaven!  He had been closed up somewhere, and only weighed 7 pounds.  He had a smashed foot, neuralgia, all kinds of stuff, but we got him fixed up and he has certainly thrived!  He’s the one who carries socks all around the house.

And STRIPE…  he was born at the Waters (our neighborhood) – his father was Rufus (feral), who walked around the Waters meowing all the time, and his mom was a beautiful Siamese type feral cat who I named Priscilla.  He had a brother, RJ, who was run over in the alley behind our house, and Mama is his only other sibling.  We had sort of tamed Stripe, but Memorial Day several years ago I found him in the carport, bleeding and scared.  Someone had taken the initiative to shoot him, thankfully only in the leg, and it didn’t break any bones.  We got him patched up and he’s been inside ever since. 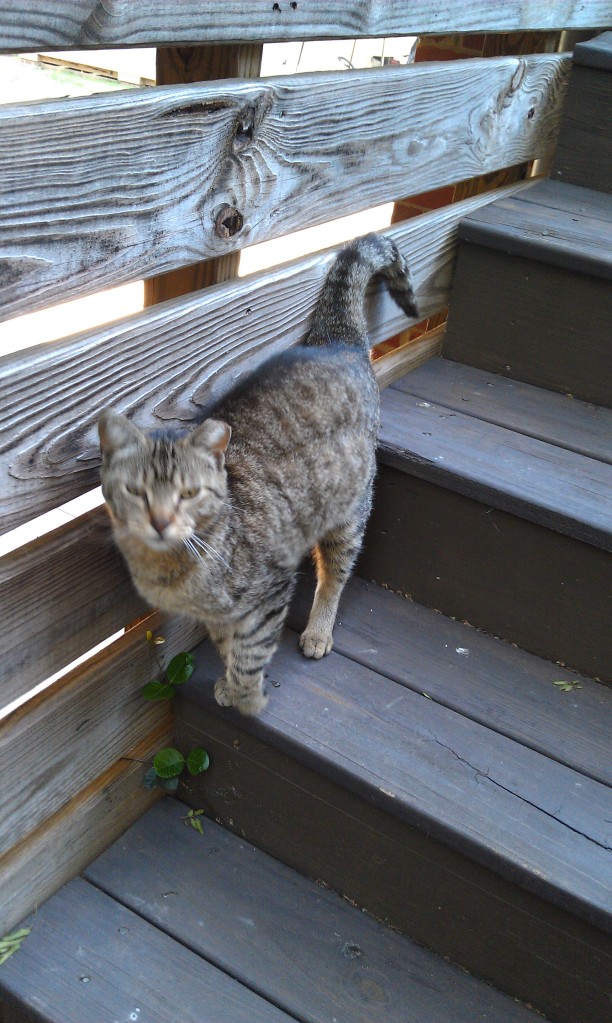 Mama, the last carport kitty. She is Stripe's sister.

So, that is the story of our brood.  They are all rescues of one sort or another and all have totally different personalities.  Because of my soft heart, our carport became the feeding ground for Waters feral cats for many years.  We are down really to only mama, but we have captured countless kittens, and adults too, and have taken them to get fixed and we released them or gave them to the shelter along with a donation.

My turn…I have met Martha’s cats and they are beautiful and healthy.  She really does have a cat that carries socks all over the house, and I’ve never visited her without seeing several scattered all over her floor! (she’s actually a fastidious housekeeper, so don’t get the wrong idea!) And to the upstanding citizen who shot Stripe….I hope you’re reading this, and I hope you feel rotten.  Maybe you’ll feel better if you send a hefty donation to our local animal shelter.  How ’bout it?

Martha keeps a picture of my foster family from 2010 on her fridge.  Everyone remembers the sweet mom, Sadie and her 6 adorable babies.  You can see baby Rowdy and Sammy looking straight at the camera in this one. 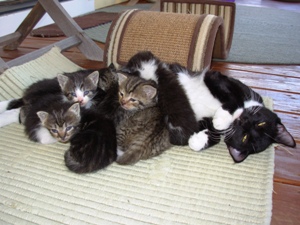 Another neighbor who has done a great deal to  help keep down the feral cat population here is my pal Michelle.  I finally got her entire family over to my house last weekend to see the kittens.  Between the wife and the two adorable children I’m hoping Nathan will lose his resistance and agree to adopt one of the babies.  C’mon Nathan, you know resistance is futile! 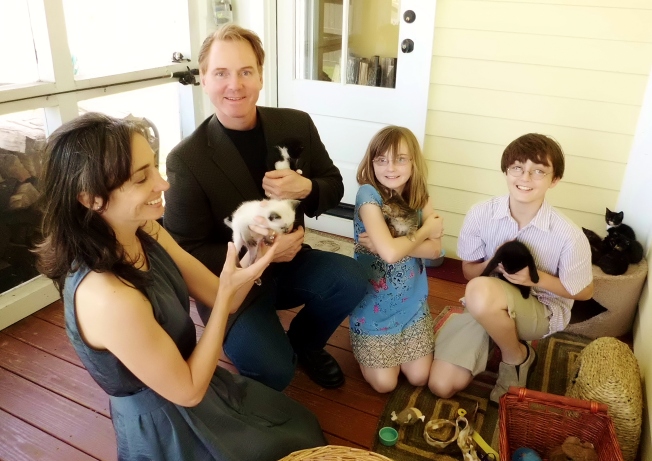 The only thing missing from this picture is apple pie and baseball.

I want to close this entry by thanking everyone who does their part to help homeless animals.  I do the fun part, but it’s folks like Martha who do the real work.  Thank you Miss Martha!