Scarlett really hit the jackpot when my friend offered to give her a safe, happy home.

Are all chicken mommies named Debbie?

No, Scarlett, just the really good ones!

Debbie has a beautiful roomy yard for Scarlett with grass and sunshine and a sturdy fence to keep out predators.  It’s covered over the top to thwart hawk attacks as well.  We put Scarlett in the enclosure and she checked things out a bit and then had some water and food. 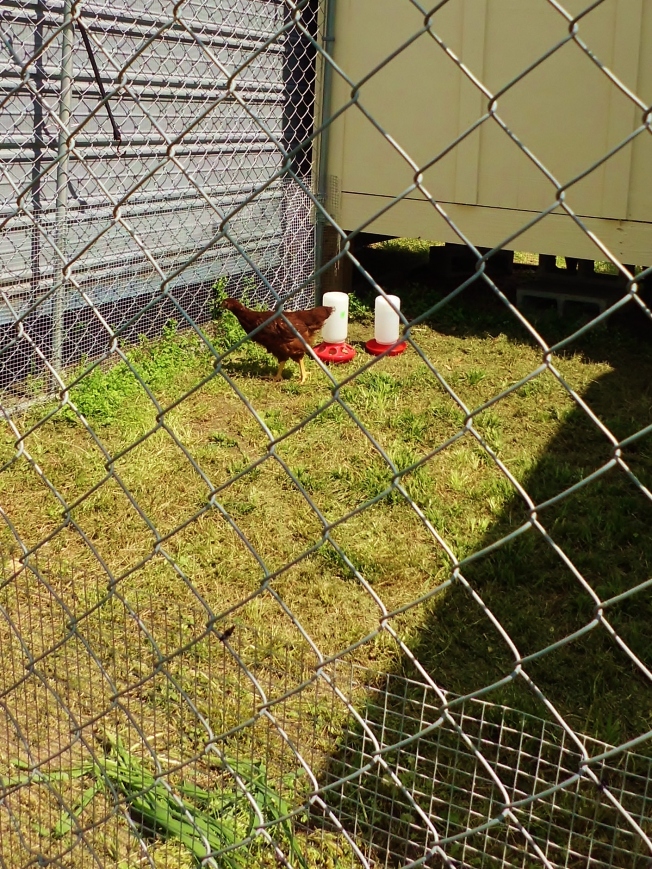 Do I really get to live here forever???

Later she inspected the indoor part of her new chicken palace and found it much to her liking.

Is this all for me?

There is a wood-shaving floor and several different perches for her to choose from when she snuggles in at night.  Steps lead down to the floor and out into the grassy yard.  This is the view from the outside.  Debbie even devised an outer door that can be removed to allow sunshine into the coop on nice warm days.

Every inch of Scarlett’s new home is designed with safety, health and fun in mind for the very lucky chicken who gets to live here.  For now, our girl has the whole place to herself, but in two weeks she will be joined by 22 little “peep-squeaks” who will be her new roommates.  This chicken area is right next to Debbie’s home where she can keep an ear and an eye on her babies.  After Scarlett was acclimated to her new surroundings, Debbie walked me toward her main chicken area, where she raises many beautiful breeds for a small egg enterprise. 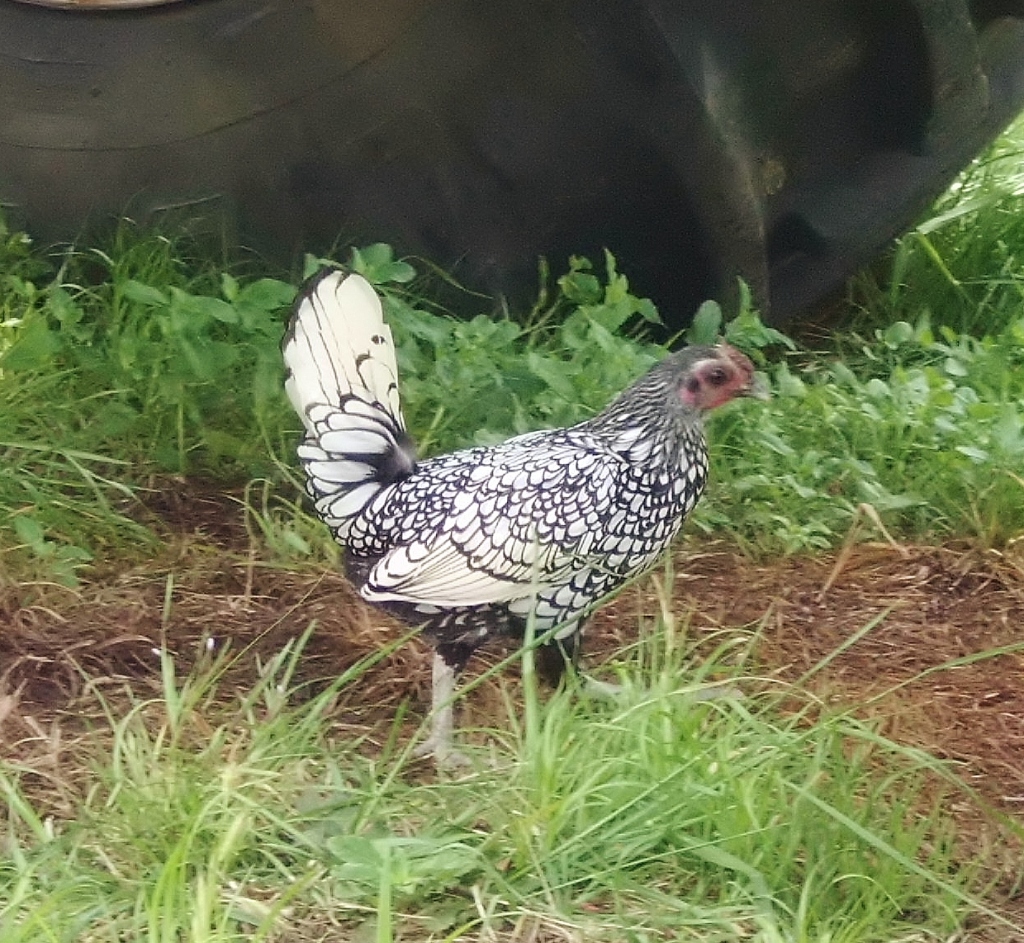 Debbie and her husband have several businesses going on at once, but the chickens are the things closest to her heart.

Walter, Debbie & Buffy (NOT the chicken-slayer)

The chickens have several fields of grass to run in as well as some large shady buildings in which to rest, sleep and lay eggs. 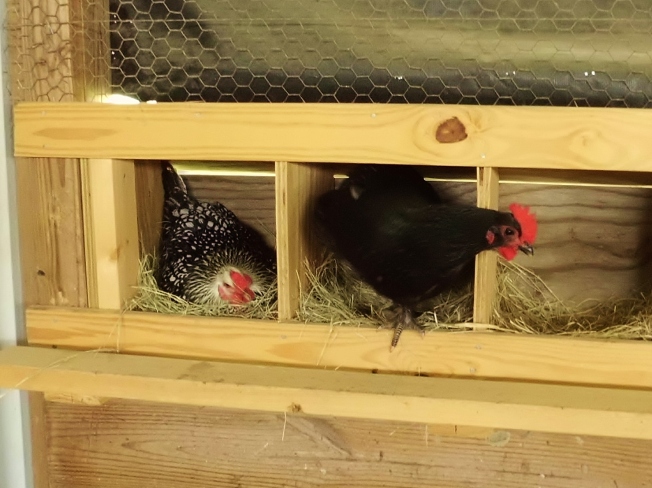 I disturbed a lady from her nest.

She had obviously been doing her job!

There’s even a slide in one of the houses, but Debbie said the chickens haven’t figured out how to use it.

Scarlett will show 'em. She saw one on TV.

As well as grassy fields and big shady houses, the chickens enjoy free-ranging among the many farm machinery vehicles on the property.  They get underneath  and enjoy the lush grass and shade. 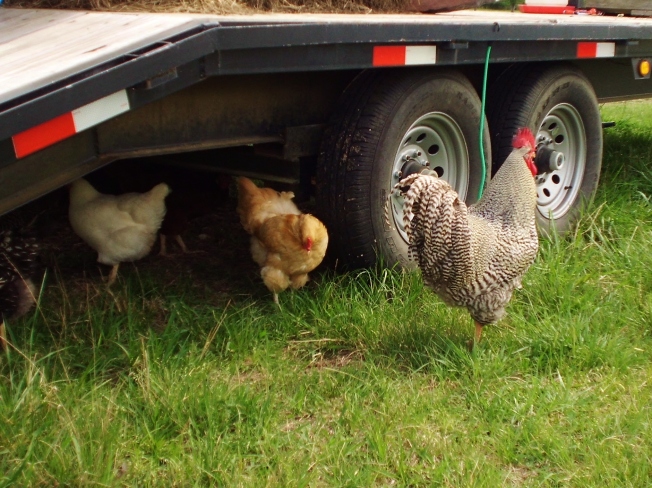 Hey, is that Daisy under there???

I spotted the celebrity of the bunch.

This dude has got it goin' on!

I’m thrilled beyond words to have found a home for Scarlett that I know she will love.  I’m so grateful to Debbie for her kindness and generosity.  After I got home she called me and said that the gang came down to Scarlett’s pad and said hello to the new girl.  She acted uninterested but unflustered.  Deb will eventually introduce her to the group after she’s spent time with the new babies and I’m sure by then they will all be friends.  I left her home feeling giddy and sad at the same time.  It’s always hard to say goodbye to a pet, but leaving Scarlett in Debbie’s capable hands felt exactly right.  I saw two good omens on the thirty-six mile drive back home… 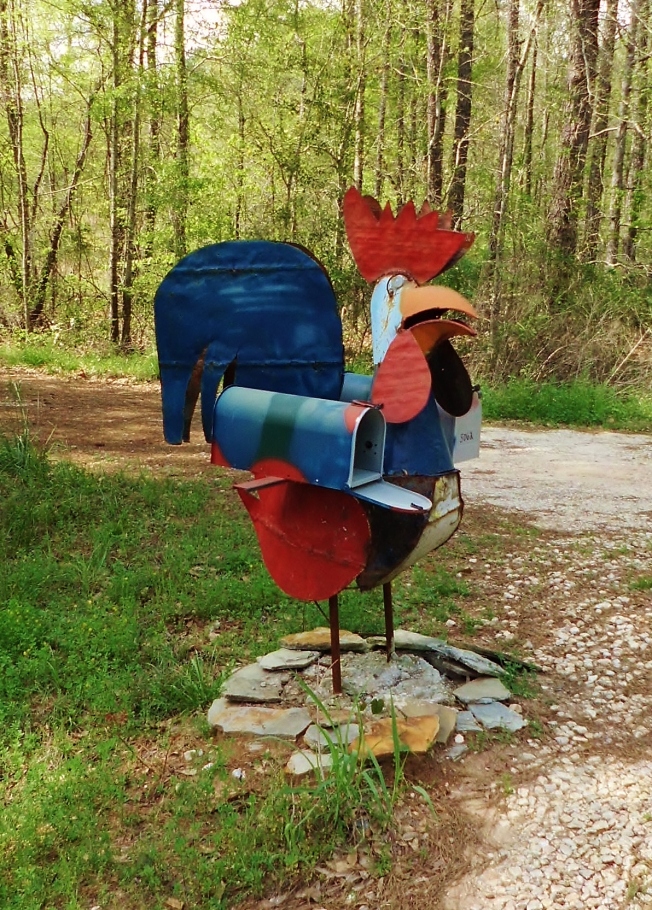 Wonder if my HOA would approve this mailbox?

The “chicken” part of the kittybunnychicken has come to a happy end.  Stay tuned for the next adventure.  Here’s a hint… 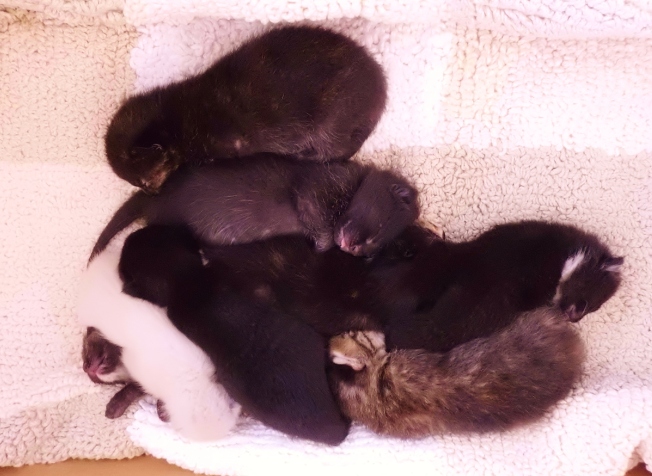 4 thoughts on “Disneyland for Chickens”